I have recently discovered sumac, and I love the depth of flavour this spice adds to dishes. It has quickly become a staple in my cooking and it was only a matter of time before I added it to a stir fry.

In this bulgur wheat stir fry with Mediterranean spices recipe, I used a combination of sumac, allspice and oregano to create the taste of the Mediterranean foods which we’ve grown to love. This delicious stir fry is suitable as vegetarian or vegan meal and is very quick to make.

Sumac is one of the least known Mediterranean spices in the Western world, but it is very popular in Middle Eastern cooking. The sumac plant grows in many areas of the Middle East, and the berries are dried, and used in cooking. Sumac is usually sold with added salt in the UK to maintain the shelf life, as well as to prevent clumping of the powder.

Sumac has a complex flavour; it has a sharp acidic taste with earthy, woody notes. It is particularly good sprinkled over roasted vegetables, baked fish or meat, and chickpeas, potatoes, rice and other grains. It doesn’t usually require long cooking, so it can just be used to garnish or lift the taste of food at the end of cooking. A combination of these properties makes sumac a natural addition to this stir fry with bulgur wheat and vegetable. 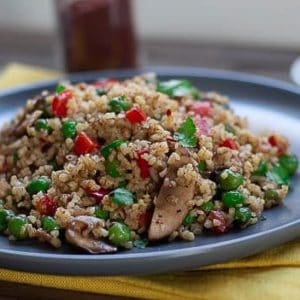 Most of the sumac available in UK have added salt. Taste the stir-fry after you have added all ingredients, to determine if you need more salt.

Trying new recipes can sometimes be overwhelming. Different recipes call for different ingredients, which you have to buy each time. “25 from 30”, contains 25 diverse recipes from the same set of 30 ingredients, most of which you already have in your kitchen, to make mealtimes easier. LEARN MORE...

We use cookies on our website to give you the most relevant experience by remembering your preferences and repeat visits. By clicking “Accept”, you consent to the use of ALL the cookies.
Do not sell my personal information.
Cookie SettingsAccept
Manage consent

This website uses cookies to improve your experience while you navigate through the website. Out of these, the cookies that are categorized as necessary are stored on your browser as they are essential for the working of basic functionalities of the website. We also use third-party cookies that help us analyze and understand how you use this website. These cookies will be stored in your browser only with your consent. You also have the option to opt-out of these cookies. But opting out of some of these cookies may affect your browsing experience.
Necessary Always Enabled
Necessary cookies are absolutely essential for the website to function properly. These cookies ensure basic functionalities and security features of the website, anonymously.
Functional
Functional cookies help to perform certain functionalities like sharing the content of the website on social media platforms, collect feedbacks, and other third-party features.
Performance
Performance cookies are used to understand and analyze the key performance indexes of the website which helps in delivering a better user experience for the visitors.
Analytics
Analytical cookies are used to understand how visitors interact with the website. These cookies help provide information on metrics the number of visitors, bounce rate, traffic source, etc.
Advertisement
Advertisement cookies are used to provide visitors with relevant ads and marketing campaigns. These cookies track visitors across websites and collect information to provide customized ads.
Others
Other uncategorized cookies are those that are being analyzed and have not been classified into a category as yet.
SAVE & ACCEPT