Shakshuka (also called chakchouka, shakshouka), which is basically eggs cooked in tomato sauce with peppers, and spices is one of my favourite vegetarian meals. It doesn’t take a long time to cook, keeps you fuller for longer and is great, anytime of the day. Sometimes, I find the tomato sauce a bit too intense; and that is the reason why I love chickpea shakshuka.

The eggs and tomatoes in shakshuka make it a nutrient rich food, but the added chickpeas in this shakshuka recipe makes it a more balanced one-pot meal. Chickpeas are a rich of source of fibre which helps to feel fuller for longer; and help with better overall digestive health. I like to have this vegetarian meal in the morning, on really busy days because it keeps me going for longer.

There are differences of opinion on the origin of Shakshuka. Some believe it originated from Israel, others say Turkey while some say Tunisia. One thing that is clear is that it Shakshuka has origins in North Africa and possibly Middle East. Shakshuka is an Arabic word which means “clump together”, and it was made popular in Israel by Tunisian Jew.

Shakshuka is now enjoyed in many parts of the world, with different adaptations of the recipe. Be careful not to mix it up with saksuka like I mistakenly did. Saksuka is a Turkish side of vegetables, mostly aubergine, cooked in olive oil.

This spinach shakshuka is also one of my favourite versions of the meal.

Can You Reheat Shakshuka?

Although shakshuka can be prepared from scratch in less than 30 mins, sometimes, we don’t have that time to spend in the kitchen, particularly in the mornings. Or if you find you’ve accidentally made too much. I will say that shakshuka sauce can be reheated, but not with the eggs.

Reheating the sauce with already cooked eggs could cause food poisoning if the eggs are not warmed through. The other thing that could happen is that the egg overcooks, and the yolk pops and makes a mess.

You can make the sauce (with chickpea and tomatoes) for this chickpea shakshuka recipe beforehand; just make sure you keep it in the fridge. When you’re ready to eat, pour the sauce in the pan, allow to heat up and add the eggs. You may need to add some water to the sauce because it will probably have thickened; you want some liquid to mop up with bread.

This chickpea shakshuka recipe is quite adaptable. I added smoked paprika (my favourite spice!), which gave it a lovely smokey kick, but you can substitute with your favourite spices and herbs.

I made this easy shakshuka recipe on the hob in less than 30 mins, but it can also be baked in the oven if it is more convenient for you. 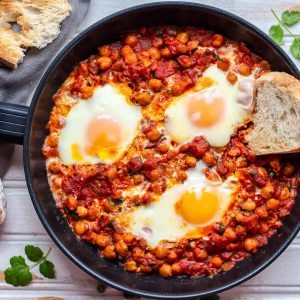 This site uses cookies to imporove your experience. By continuing to use this site, it is assumed that you're ok with this. Read More