Irio originates from the Kikuyu and Meru tribes in Kenya, and simply means “food”. It used to be the main dish at mealtimes. There are so many variations of this dish; and it is sometimes called “mukimo”, which means “mashed food”. This Kenyan irio with caramelised onions is super tasty and very easy to prepare. The addition of caramelised onions lifts the flavour greatly; taking it from simple to amazing.

Kenyan irio is a simple meal of potatoes mashed with corn and green peas, sometimes with green vegetables like spinach for extra nutrients. Traditionally, dried green peas is used; which would be soaked beforehand. Some recipes also use red kidney beans instead of green peas.

Whichever way you prefer your irio or mukimo, it doesn’t take away from the fact that this simple meal is comforting and filling as well. Our ancestors have always been clever at combining foods to maximise satiety and nutrient intake; and irio is no exception to this. It is a filling meal; typically dipped in stews or eaten with roasted meat. Githeri is another filling and nutritious dish from the Kikuyus in Kenya.

How to Prepare Irio with Caramelised onions

In traditional irio recipes, the corn and peas are cooked until nearly soft; then the potatoes added, but there is no need for that as we will use frozen peas and sweetcorn; which only need a few minutes to cook.

Do not be tempted to increase the heat to make the caramelising faster, the onions will burn, and develop a bitter taste. 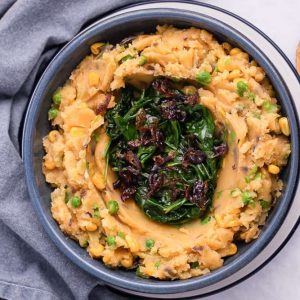 Calories: 363kcal
Keyword Irio, Kenyan food, Mukimo
Tried this recipe?Let us know how it was!

Trying new recipes can sometimes be overwhelming. Different recipes call for different ingredients, which you have to buy each time. “25 from 30”, contains 25 diverse recipes from the same set of 30 ingredients, most of which you already have in your kitchen, to make mealtimes easier. LEARN MORE...

We use cookies on our website to give you the most relevant experience by remembering your preferences and repeat visits. By clicking “Accept”, you consent to the use of ALL the cookies.
Do not sell my personal information.
Cookie SettingsAccept
Manage consent

This website uses cookies to improve your experience while you navigate through the website. Out of these, the cookies that are categorized as necessary are stored on your browser as they are essential for the working of basic functionalities of the website. We also use third-party cookies that help us analyze and understand how you use this website. These cookies will be stored in your browser only with your consent. You also have the option to opt-out of these cookies. But opting out of some of these cookies may affect your browsing experience.
Necessary Always Enabled
Necessary cookies are absolutely essential for the website to function properly. These cookies ensure basic functionalities and security features of the website, anonymously.
Functional
Functional cookies help to perform certain functionalities like sharing the content of the website on social media platforms, collect feedbacks, and other third-party features.
Performance
Performance cookies are used to understand and analyze the key performance indexes of the website which helps in delivering a better user experience for the visitors.
Analytics
Analytical cookies are used to understand how visitors interact with the website. These cookies help provide information on metrics the number of visitors, bounce rate, traffic source, etc.
Advertisement
Advertisement cookies are used to provide visitors with relevant ads and marketing campaigns. These cookies track visitors across websites and collect information to provide customized ads.
Others
Other uncategorized cookies are those that are being analyzed and have not been classified into a category as yet.
SAVE & ACCEPT